All kids love to dress up in fancy dress costumes and what better time of year than Halloween to hold a costume party? Kids love to go Trick or Treating too but if they are doing this it’s a good idea that they are supervised by an adult. This is not only for the safety of the children but also because some Halloween costumes for kids are quite scary and they might give an elderly person a fright. 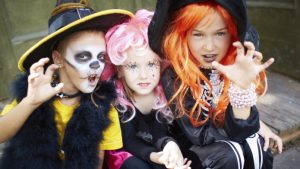 What kind of Halloween costume your child wears depends on their age of course. You can get some really cute baby and toddler Halloween costumes, some scary-looking kids costumes, and some more flirtatious teenage Halloween costumes. The costumes kids prefer also differ by age according to the movies and cartoons they are into as well, as some of the best costumes are based on well-known fictional characters. 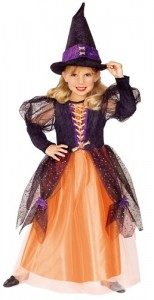 Some Halloween costume ideas for little girls include a Bewitched witch wearing a long black and purple dress with a classic pointy witch’s hat. You can accessorise any witch costumes with stripy tights, witch wigs, a broomstick or a toy cat. Other popular witch costumes for little girls are Harry Potter schoolgirl witches, as they can wear a school uniform with a cloak and a pointy witch’s hat, and carry a wand.

There are lots of other characters from the Harry Potter movies that you can base costumes on for little girls and little boys at Halloween. You can create a costume yourself or buy Death Eater costumes, Dumbledore costumes, and costumes for pretty much all the professors at Hogwarts and most of Voldemort’s followers as well.

You can get all kinds of pretty, glittery and colourful witch costumes for girls, as well as little devil, vampire, and pumpkin costumes, amongst others. Little boys tend to prefer to dress up in more scary or gory costumes, such as zombie costumes, skeleton suits, ghost, werewolf and Dementor costumes. They also love characters such as the Joker from Batman and the ghost ship pirates from the Pirates of The Caribbean movies.

For boys vampire costumes with lots of fake blood are also popular, as are scary Halloween masks. There are loads of different masks available to buy, but some of these can really frighten other kids so be careful what you let your child wear.

As for teenagers most of them love the blockbuster movie Twilight so this year vampire costumes will be more popular than ever, but with a modern twist. Other costumes favoured by teenagers at Halloween include characters from horror movies, as well as any gothic style costumes or anti-authority statements. What you allow your teenager to wear is up to you but Halloween is a good time to allow them to express themselves and get really creative with their costumes.

There are many fabulous Halloween costumes available for kids of all ages, as well as accessories such as wigs, make-up and masks to add to any homemade creations, so Halloween should be loads of fun this year!

Are Your Kids’ Halloween Costumes Safe?