When it comes to tweens, particularly boys, choosing a Halloween costume will be as much about what is “cool” as it is about what they like. You can now find fancier and fancier costumes targeted for tweens for Halloween, in fact the choices are nearly endless, so be creative! 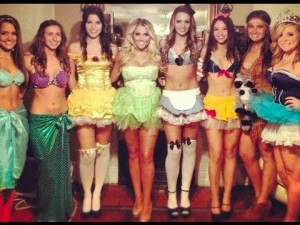 The fact of it is, Halloween is becoming a holiday that can be enjoyed by the whole family – not just the very young. However, there seems to be a gap between the sexy adult Halloween costumes and the Halloween costumes worn by children in preschool and elementary school. This gap is becoming filled by a set of costumes marketed directly by to this middle group.

The cartoons, movies, and comics have made these characters popular with all age groups. While a simple costume may seem childish, a few tweaks and it can be sexy and cool. Everyone loves a super hero, and you are sure to see a few of these flying about your town on Halloween night.

Another member in the superhero lineup, the darker side of Batman seems perfectly suited for Halloween, especially the version from Batman Returns. Like the Superman costume, this is a classic for all ages, though certain detailing will definitely differentiate and adult/teen costume from a child’s costume.

Due to the chaotic world events, the popularity of soldier costumes is increasing. Plus, this costume can be relatively easy to put together with all the camouflage clothing that is readily available. Some face paint and your look is complete. Parents should be aware, however, that this costume does offer low visibility to oncoming traffic at night. 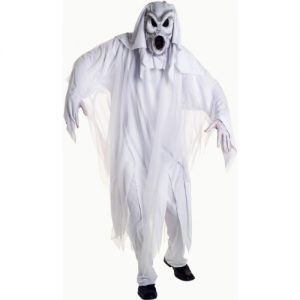 These costumes are also relatively easy to put together with the help of a mask and/or some face paint, making them a popular choice for young adults on the go. The “Scream” movie ghost is one popular addition to this category.

Bad spelling aside, these clown costumes are marketed towards the young adult crowd. They have a more modern design look to them, and are not as scary as an adult costume might be but not as silly as a child’s costume. Instead of the robes usually worn, these costumes often utilize jackets and jumpers, making them popular with teens.

Fading light Phantoms
For teens willing to spend a little extra money on their Halloween costume, these specialty masks can give a spooky effect after dark. Basically the mask includes mounted lights that are set to fade in and out, creating a creepy effect in the dark. Add to that they are easy to wear, and it is no wonder they are so popular with teens.

Parents should keep in mind that many young adult costumes are not designed to be as visible to cars and other people as a child’s costume might be. Because of this, some parents choose to attach reflective tape to the costume in some fashion, or have their children carry flashlights or glow sticks to make them more visible to oncoming traffic.

The Demand for Sexier Halloween Costumes is Increasing Every Year